After a short visit to South Korea, and a few weeks in Indonesia, I was off to Kathmandu Nepal. I had never been to Nepal before, but my best friend here in Portland Oregon happens to be a Sherpa from the Mountainous Khumbu region of eastern Nepal… After first meeting Mingma around 2002, I have wanted to visit his country. 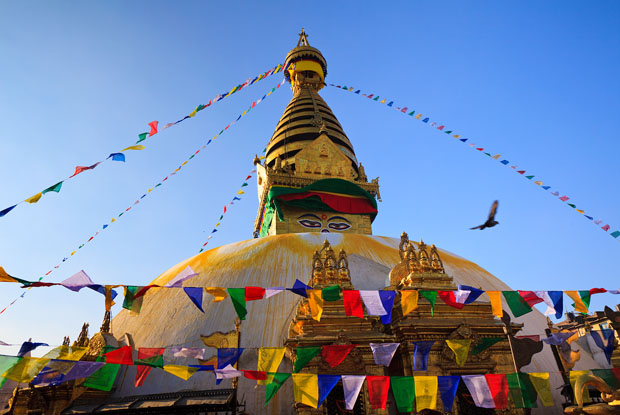 After flying from Bali to Thailand, and then to New Dehli, I was finally in Kathmandu. The first thing I noticed immediately is that the temperature felt just like what I was used to at home, and it was a huge relief after being in Indonesia for 3 weeks. Mingma had arranged some transportation for me and a hotel in the Thamel area of the city. After exiting the front door of the airport, I searched all over for my name on a sign, but didn’t see one. I waited for about 20 minutes, and finally just decided to arrange my own transport to my hotel. The taxi system in Nepal is quite the experience, and not to bore you with the long story, I will just say that I ended up in a taxi that looked as if the wheels were going to pop off anytime, but I did manage to make it to my hotel in one piece.

Shortly after arriving there, one of Mingmas friends, Bob came to the hotel to pick up some of the luggage I had brought for his family.  Bob spoke pretty decent english, and after briefly checking over the things that were sent for him and his brother, we were off to the monkey temple (Swayambhunath) to make some photos… 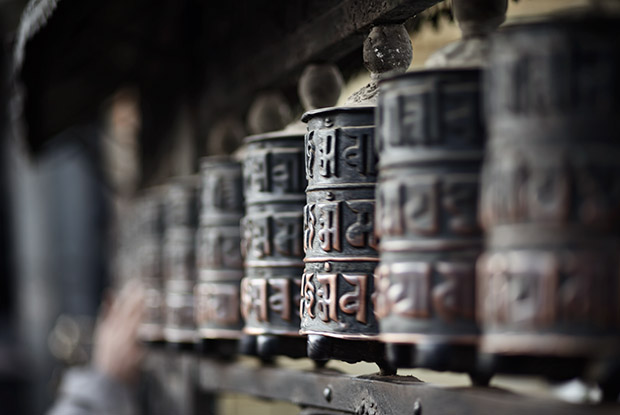 Swayambhunath is an ancient religious complex atop a hill in the Kathmandu Valley, west of Kathmandu city. It is also known as the Monkey Temple as there are holy monkeys living in parts of the temple in the north-west. Bob had borrowed his girlfriends “scoot”, and that was what we would move around the city on. I grabbed my photo gear and we we off.

I’m quite a bit bigger than bob, and with my photo pack, it made things a little interesting while riding on the scoot with him, but we managed. Driving in the city is crazy to begin with, but Bob was what I would call a “very rough” driver. He drove that scoot like crazy, weaving in and out of cars and people, just barely missing collisions by inches. After about 20 minutes of the craziest ride of my life, we were at the famous monkey temple about an hour before sunset. 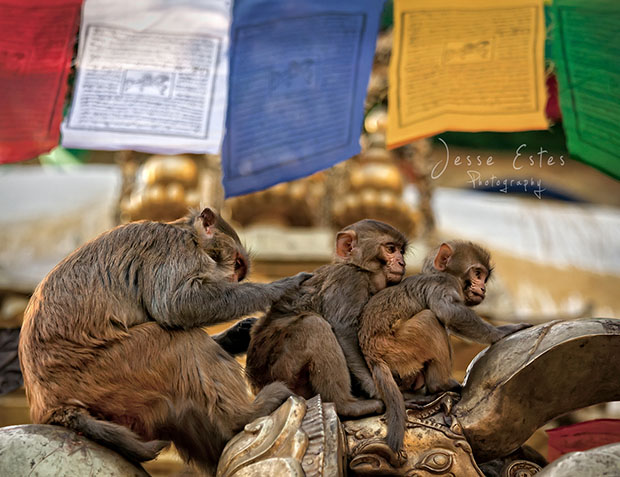 The temple itself is really cool and one of my favorite places that I visited while in Nepal. It overlooked the city, and there were all sorts of things to photograph there. Just as I was leaving I noticed some women lighting the butter lamps, and decided to photograph them. They were very kind and didn’t mind my camera at all. One women in particular caught my eye; she really reminded me of the photo of the Afghan women that was made famous on the cover of National Geographic quite awhile ago. I spoke with her briefly, but her English was not good enough to carry on a conversation. The brief conversation I had with her, was enough for her to fell comfortable and she allowed me to photograph her for about 10 minutes. 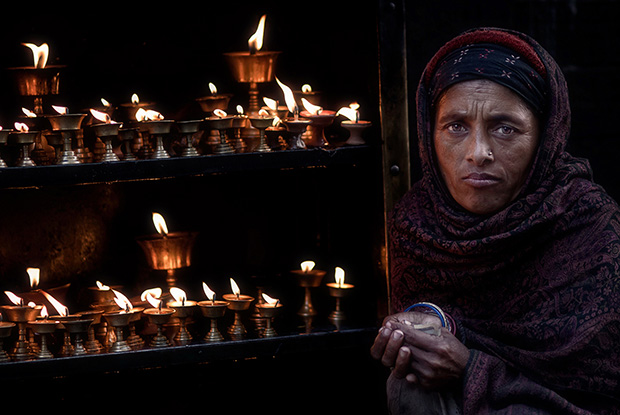 It was now time to head back to Thamel for some beer and food, and as we came down the steep stairs of the temple and reached the scoot, we noticed that back tire was almost flat… Seems as though all that crazy ass driving, and the additional weight of me and my gear was enough to cause a blowout. Bob told me to wait there while he road down the hill and got things patched up. It only took him about 20 minutes and we were back on schedule to Thamel.

Thamel is the main tourist area of Kathmandu, and the hotel I stayed in was right next to the trekking company that would arrange my short flight to the Solu Kuhmbu, so it all made sense. I only spent 2 days in the city before heading up into the Himalayas to meet up with Mingmas father. 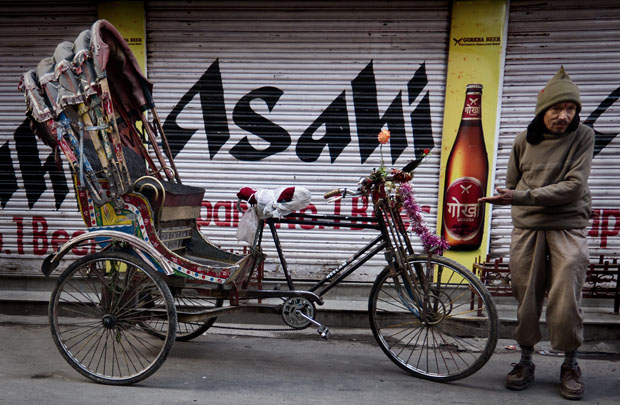 The second day in the city, I just moved around the town checking things out. I noticed several young boys that appeared very high from huffing glue. They would just walk up and down the streets carrying small plastic bags with glue similar to the rubber cement you use to fix shoes with. This was very common and quite sad, as these street kids most likely didn’t have any parents, and had to fend for themselves on the crazy streets of Kathmandu. I mostly just tried to kill time because I wanted to visit the famous Hindu temple, Pashupatinath, at night so that I could photograph the Sadhu’s in the dark. 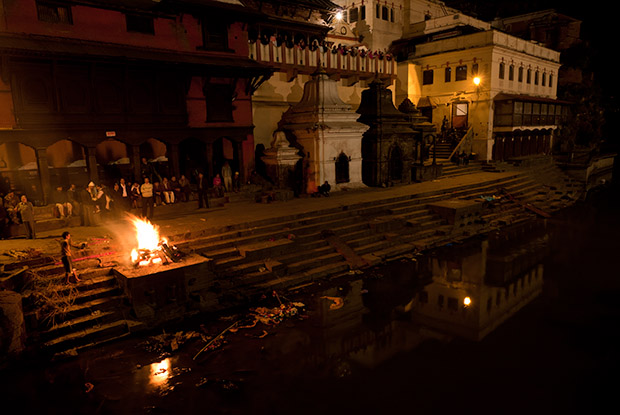 Pashupatinath Temple is the oldest Hindu temple in Kathmandu Nepal. The temple was first established in the 17th century. We got there about an hour after the sun had set and as we approached the temple you could immediatly smell the odor from the cremations that take place along the Bagmati riverbank. I was told that they have about 20-40 cremations per day there, and when we arrived, I counted 4 taking place. 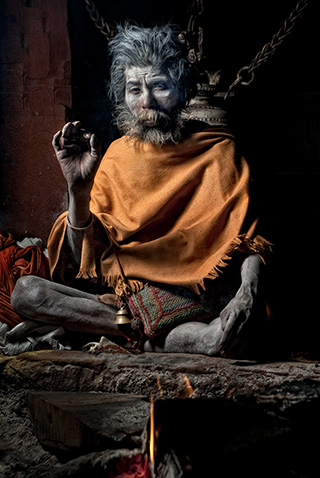 I checked it out for a bit, and then moved on to find some Sadhus’ to photograph. We met a couple of them outside the temple grounds, but I was told that they were mostly after money and not the so-called “real” Sadhu’s. I photographed one of these guys for about 15 minutes, and towards the end there was quite a crowd gathering around to see what all the comotion was about. This guy had some of the longest hair that I had ever seen, and towards the end, he insisted on getting naked. He mentioned that if we came back the next day, he would hang 10 kilos of weight from his penis… Anyhow, I snapped one more shot with him and Bob, per Bob’s request, and then we continued to work our way inside the temple where the “real” Sadhu’s lived.

These Sadhu’s inside the temple are well respected by the Nepali government, and are even given Ganja for their religious purposes.  Many of them travel from India, and stay on the premises for a few months at a time.  They were very kind and allowed me to photograph them with no problems at all. It was late in the evening for them and a few of the elders were going to bed, but still made a few minutes for me to get some photos. 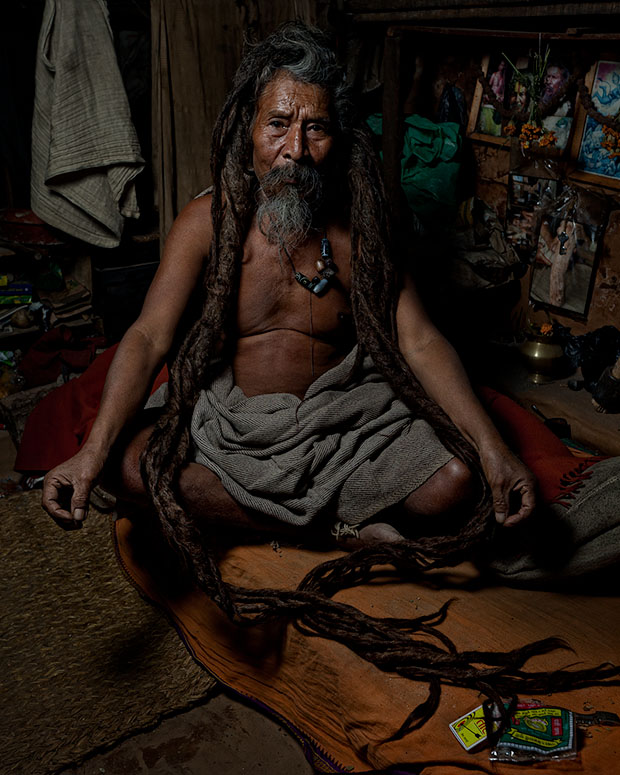 On the far end of the temple, we came across 2 of the younger Sadhu’s that were very happy, and busy smoking Ganja. One of them was a “Yoga Master”, and they were more than willing to pose for some photographs. They even re-filled their Chillum pipe and proceeded to smoke so that I could make some photos of them smoking… 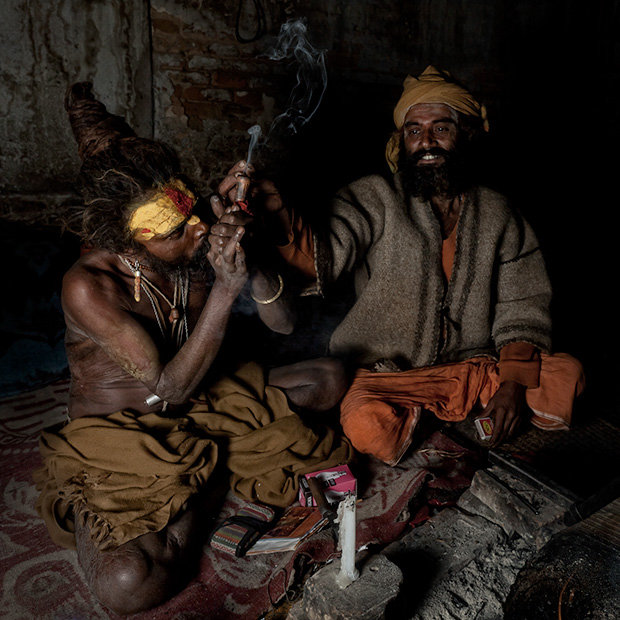 After making a few photos of the young Sadhu’s, we were off for another crazy ride on the scoot back to Thamel for some beers and food again. In the morning, I would leave on a short but VERY crazy flight to Lukla, and start my journey into the mountains of western Nepal.