After spending a few days at Mount Bromo, we were off to Kawah Ijen for the second time. Photographing Kawah Ijen is amazing and the ruggedness of the landscape combined with the sulfur mining, offers unlimited photo opportunities. During my first trip there last  year, I got a nice feel for the place, but it was a quick 1 day trip and not enough time to really explore. This time we would have a few days to really check it out. 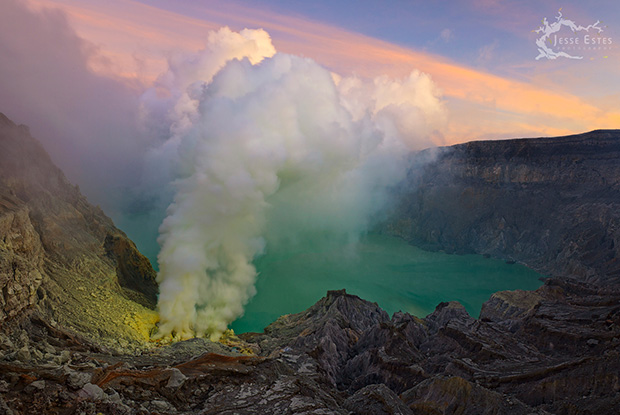 After photographing Bromo at sunrise, we started the long and crazy drive over to Kawah Ijen. The last stretch of road hasn’t been maintained for quite some time, and it’s very steep and rocky. I’m amazed at how well our driver handled the road with just a small van. He obviously had a ton of experience in such conditions, and while I was waiting for a tire to blow out, he just took it slow and easy. We stayed at a large coffee plantation that was also very interesting. It consisted of a little community of workers that lived there as well as the plantation itself. We were quite tired and had to wake up early in the morning to photograph the famous “blue fire” of Ijen, so we didn’t really explore the plantation on the first day and opted to crash out early. 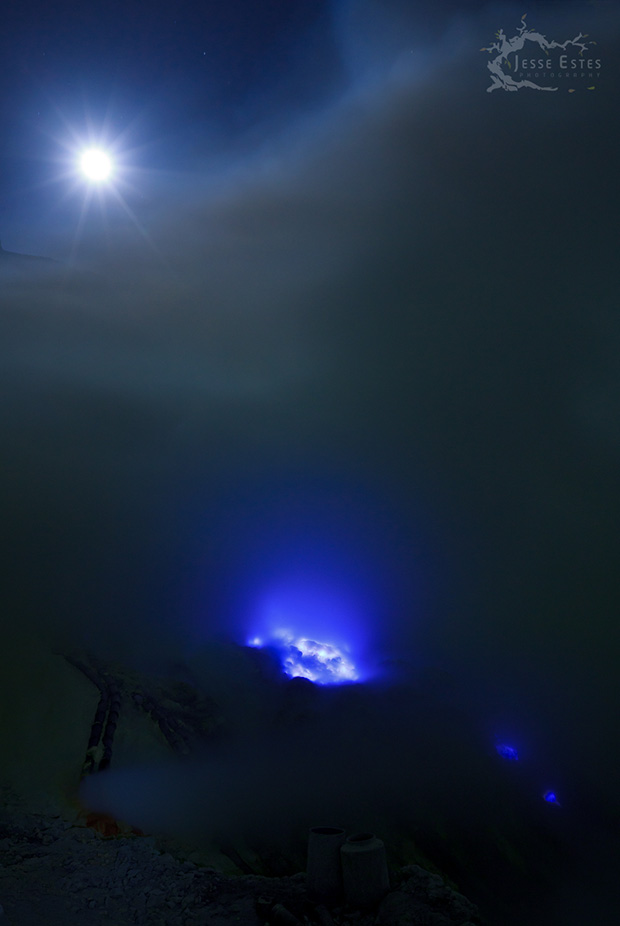 We woke up at 1:30am and started the 40 minute drive. It had been raining hard in the area for a few days, causing a lot of sulfur smoke, and limiting the photographic opportunities. On our drive in, it was raining lightly and we started to wonder how it would be up there at the crater. We put on our rain jackets and started the 45 minute hike. This hike is not long, but it does have some steep sections. Some people would call this trekking, but really, it’s just a short walk that takes a little effort.  About 10 minutes into the hike, we encountered a young girl that obviously couldn’t handle the first steep area. She was laid out on the trail being nursed by her friends. Helminadia is also a nurse, and was trying to help her, but in the end I think she could have  just been trying to get some attention from her boyfriend, who knows. We would encounter another girl in a similar situation up towards the top of the trail; these folks obviously weren’t in the best physical shape, and were paying the price… 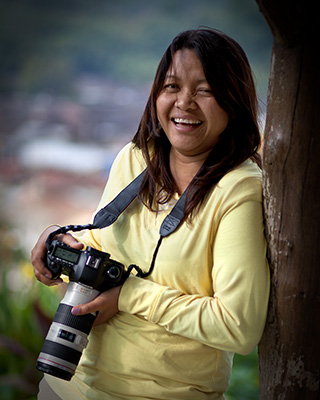 Lucky for us the rain was light, and intermittent the whole morning. As we got closer to the crater rim, we started to cough because of the sulfur smoke in the air. I didn’t experience this the first time I was there. When we started down into the crater, it was obvious that we would encounter a lot of sulfur smoke. We had masks, but I find them to be a pain to deal with. We did use some plastic covers for our cameras though. After my last trip, I read a story about a reporter that had a 5d2 and a couple of lenses ruined by the sulfur smoke. Apparently the smoke/dust is really bad on electronics. I didn’t know this the fist time around and was shooting while big clouds of sulfur smoke blew directly into me with no camera protection… After reading that article, I feel lucky that I didn’t ruin any of my equipment.

We got lucky to have the full moon overhead with the blue fire, but the light rain made it a little difficult for long exposures.

While down there photographing in the dark before sunrise, we suddenly heard some big explosions that startled everyone including our guide that has worked and lived in the area for more than 15 years. It turns out that the party of 10 or so people with the girl that was laid out on the trail, decided to celebrate someones birthday by launching a bunch of fireworks. This is very disrespectful to the local people and the miners, they have spiritual beliefs about the area… The rockets continued for about 5 minutes, and it was clear that nothing like this had ever happened before. Our guide quickly went up the steep rugged trail and scolded the people sharply about their misconduct. By the time we made it back up there for sunrise, those people had left. They were probably pretty embarrassed and got quite an earful from some of the miners from what I heard. 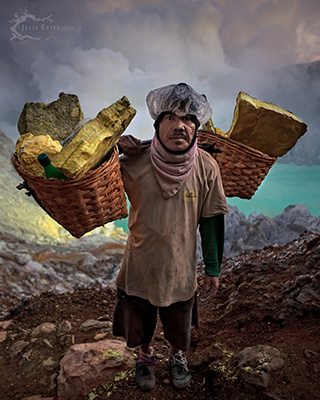 After sunrise, we continued to make portraits of some of the local workers, and slowly made our way back down to the van. After having some of the best fried bananas and noodle soup that I have ever eaten, we headed back to the coffee plantation to search out a waterfall that we had heard about the day before. After a short search, we finally found the waterfall. It was controlled by a pack of 5 young children that charged us a fee to take us down the short trail. There were 3 girls and 2 boys, and the girls were clearly in charge here and took control of the money. They all took their job very seriously though, and the boys were even sweeping the leaves off of the stairs as we were going down. I planned to make a photo of them, but after we started photographing the waterfall, they quickly got bored and were off to spend their money.

The waterfall was decent, but the better vantages seemed like they would be from below, and the morning sunlight was already getting very bright and hitting the top of the water. We made a few photos and decided to head back and get some rest before doing it all over again. 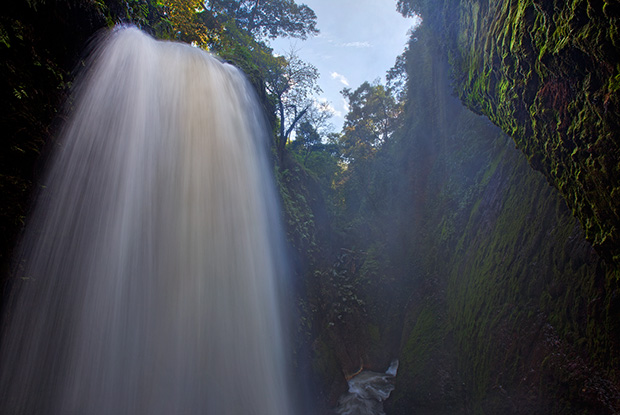 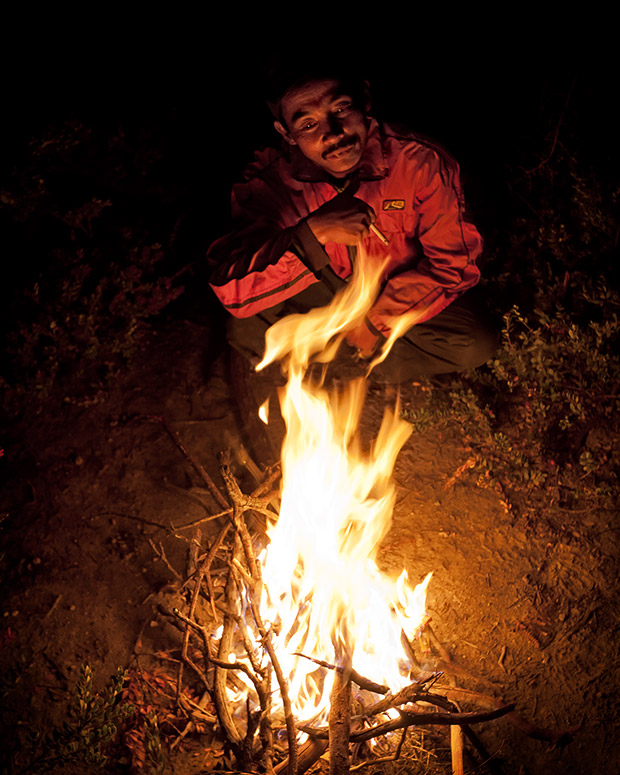 After a few days here at Ijen, it was back to Bali, and then off to China for a couple of weeks.