This is the third in a series of posts about my recent travels to Indonesia, and Nepal. You can click here to read about the start of the adventure and here to read about my journeys in Bali if you are interested. After nearly missing my flight out of South Korea, and enduring one heck of a gnarly lightning storm, I was finally in Bali, Indonesia. It was time to head over to the famous Mount Rinjani Indonesia

Before leaving for my trip, I did quite a bit of research on a few volcanoes that I really wanted to photograph. Mount Rinjani is an active volcano on the island of Lombok in Indonesia, and there are many stunning photos circulating around, but I wanted a chance to make my own image. The trek seemed like it would be hard, but not too much of a challenge; hike almost to the rim on the first day, and then complete the last hour or so the following morning before sunrise. I found out the hard way that I had greatly underestimated the challenge of the Rinjani Trek. It turns out that it’s one of the most challenging treks in all of Southeast Asia. 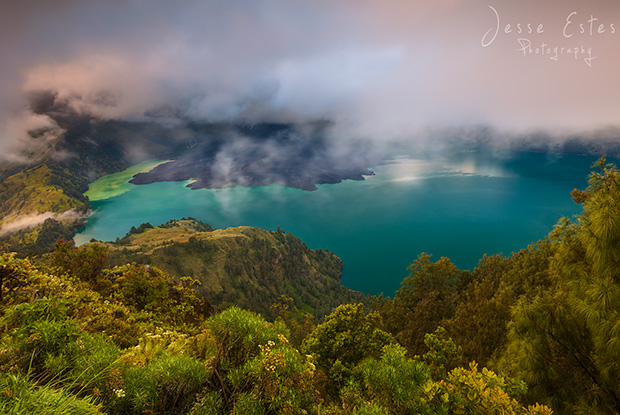 Mount Rinjani Indonesia – Getting there

The main access is from Senaru region in the north, and that’s the way we took. After a short 20 minute flight from Bali the night before, and a few hours of sleep, we left for a 2 hour drive from Senggigi to Senaru Village where we would start our trek. Our tour organizer stopped in a small village along the way so that we could buy some “rain ponchos”, in case it started to rain on us. I assured him that Helminadia and I both had rain jackets, but he was very firm, and we would later thank him greatly for making us spend the extra $5 on these ponchos.

Once we arrived in the village we met our guide, and registered with the ranger in a small office at the beginning of the trail. We were feeling pretty good at this point and ready to start the trekking. The trek started slowly up through some banana groves, but after about 1 hour we reached the “forest gate”, and this is where things got crazy… I have done quite a bit of hiking, and my fair share of bushwhacking, but I have to say, this trek was easily the hardest I had ever been on. From the forest gate to position 1 is 1.3km and very steep. About 30 minutes after leaving the “forest gate”, we started to hear some rain. Now, I live in Oregon where we get a ton of rain, and some pretty hard rain from time to time, but this was some serious rain. As soon as we started to hear it, our guide quickly through off his pack and pulled out those ponchos I was telling you about. He had them right on top, and clearly he was ready for this… 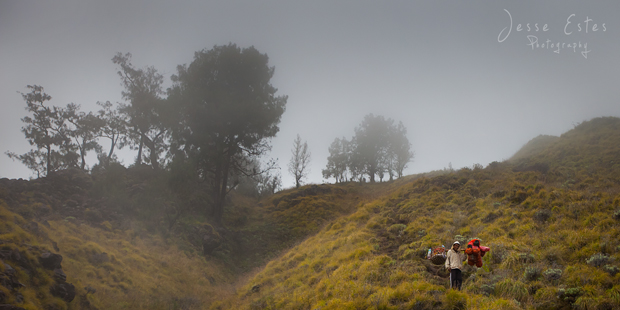 After reaching position 1 and taking a short 10 min break, we continued up to position “extra” about 1km. The trail became a small creek, and very hard to navigate. From this point on, the trail mainly consisted of large stairs made from the roots of the trees. The ponchos were nice, but in the end, we were completely soaked anyways. On the way to position extra, Helminadia had was appeared to be a small cut on her little toe. It wouldn’t stop bleeding, and it turns out that it was caused by a leach, and not a cut… Now I have dealt with tics before and even had a few dug into me pretty good, but leaches were a whole new experience that I wasn’t thrilled about to say the least. After finding out what caused it, our kind continued to spot them on our pants every now and then, and would carefully knock them off with a stick…

From position extra to position 2 was another 1.3km, and it got steeper at this stage. It took nearly 2 hours to reach position 2, and both Helminadia and I were experiencing some leg cramps at this point… After reaching position 2, we had lunch with about 20 other trekkers and only 1 other girl… I was feeling pretty bad because I’m the one that encouraged Helminadia to go on this trek with me; thinking it wasn’t all that difficult. This was her first time trekking, and it was not an easy trek by any means. 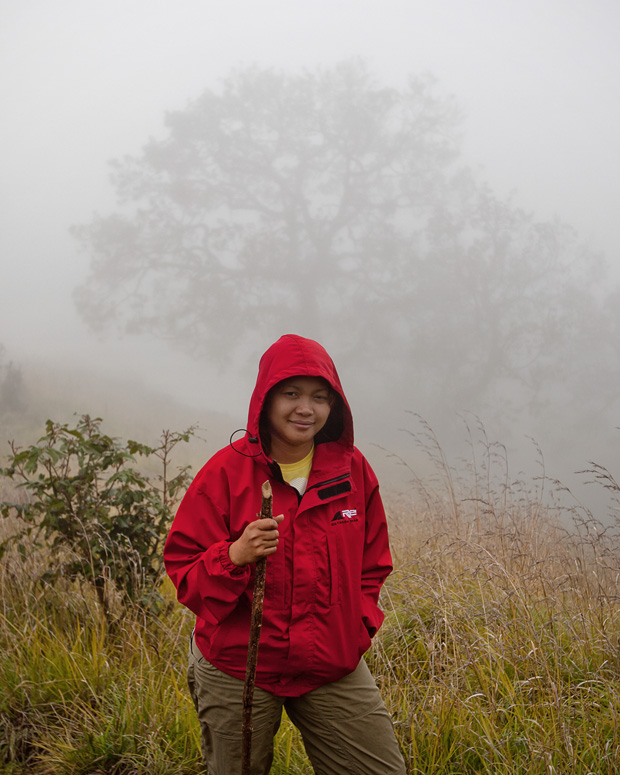 After lunch, we continued another 2 hours to position 3 where the porters setup the camp for the evening. We were both totally exhausted. My tent was setup right next to Helminadias tent, and she claims I was snoring loudly when she woke up at 3:00am to start the final 2 hours up to the crater rim. This last stretch was the most challenging, and we had already used everything we had the day before just to make it up to position 3. About half way through we noticed some trekkers coming up behind us; apparently they couldn’t wake up their guide, and decided to push on up to the rim without him. They were trying to catch us since they didn’t know where to go.

When we reached the rim, it was a little discouraging that we couldn’t even see the lake due to the cloud cover. We decided to hang out for an hour or so, and even though the mountain never appeared, we were still able to make some nice images of the lake and the new smaller volcano that has formed… Now it was time to head down for another full day of trekking. You would think that going down would be no problem, but due to the nature of the trail (large root steps most of the way), it was very hard on the knees, and we didn’t emerge from the trail until it was just getting dark. 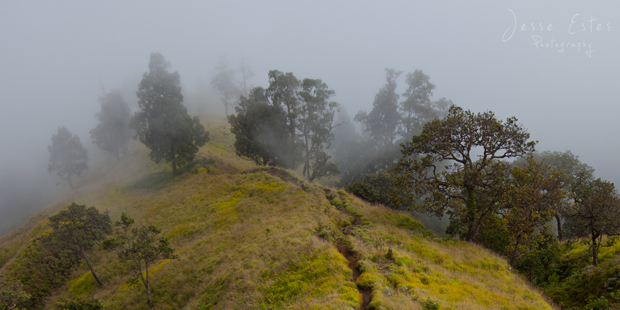 After driving the 2 hours back to Senggigi, Helminadia and I got a couple of hotel rooms and unfortunatley they were waaaaaaay up the hill from the front lobby. We waddled like a couple of old senior citizens (literally) up to the top of the hill.  I decided to hop in the shower. Just as I was stepping in I caught a glimpse of a huge leech stuck on my ankle. This thing was big, and must have found it’s way to my ankle just after I pealed my boots off of my feet at the trail head. That means he was probably there sucking on me for about 2 hours. Dang, I flicked it off right away and hopped in the shower. My ankle would not stop bleeding for over an hour. What an ending to the gnarliest hike I had ever been on…