Once I reached back to Kathmandu from the Solu Khumbu, it was time to head off and start photographing Pokhara Nepal. I contacted my friend Helminadia, and she told me that she was on her way to Nepal and had plans to go to Pokhara too. She has friends in Kathmandu that also spend time in Bahrain. She also had dreams to visit Nepal for quite some time. I was excited to have my travel partner back for the last stretch of my journey and was off to pick her up from the airport the following day. 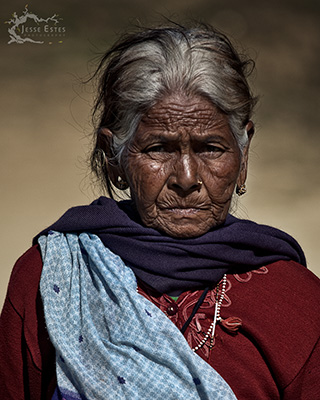 After waiting for what seemed like forever, she finally popped out from the front gate looking confused with the hundreds of people standing there. We would spend the next day around Kathmandu drinking beer and eating chilly chips, and then off to Pohkara on the craziest bus ride ever…

I had purchased the bus tickets the day before for around $10 each round trip, and we had to be at the bus stop at 7am. After getting up early and finding a taxi, we told the driver we needed to go to the stop, and he was asking us questions about which bus etc… I had no idea, and the ticket wasn’t much information. When we reached the bus stop (basically just a street lined with about 50 buses), the taxi driver was able to somehow figure out what bus we needed to get on, and we were on our way. It turns out that the $10 tickets did not include AC, and I should have just went with the $20 tickets. The guy I bought them from at the hotel lobby said there really wasn’t any difference 🙂

The night before, I had introduced Helminadia to the nepali food called “Momos” (basically potstickers). She couldn’t finish them so I told her to take them to go for the bus ride the next morning. She started eating those momo’s the next morning shortly after we got moving on the bus, and would pay for it the rest of the bus ride… 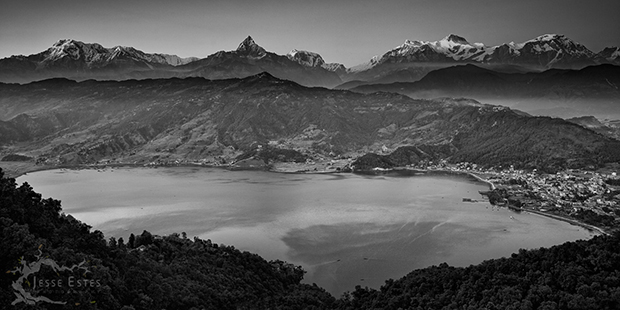 The trip starts out leaving the city of Kathmandu up steep hills, and then you basically follow a river with huge cliffs and drop offs with a very narrow road. It was a wild ride with many close calls. We would pass other trucks and buses with only a few inches to spare. This was not any help for Helminadia’s stomach, as she was suffering pretty severe bus sickness along with possible some bad chicken momos.

Pokhara is situated in the northwestern corner of the Pokhara Valley, which is a widening of the Seti Gandaki valley. The Seti River and its tributaries have dug impressive canyons into the valley floor, which are only visible from higher viewpoints or from the air.To the east of Pokhara is the municipality of Lekhnath, a recently established town in the valley.In no other place do mountains rise so quickly. In this area, within 30 km, the elevation rises from 1,000 m to over 7,500 m. Due to this sharp rise in altitude the area of Pokhara has one of the highest precipitation rates of the country (over 4,000 mm/year). Even within the city there is a noticeable difference in the amount of rain between the south of the city by the lake and the north at the foot of the mountains. 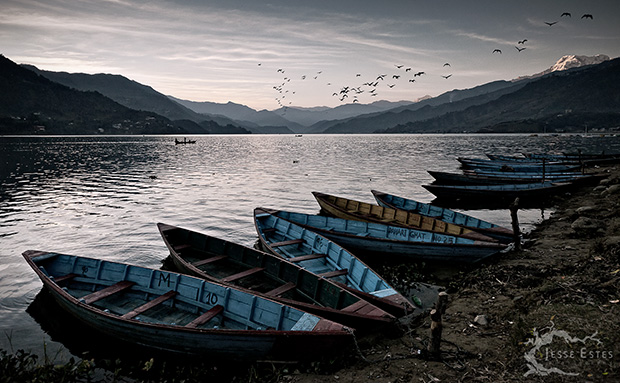 After a few hours we finally stopped for some lunch, and just as I got off the bus, I witnessed a woman vomiting everywhere outside the bus next to us. The bus stop was full of cart food, and I chose some sort of Nepali food and a couple of somosas, and Helminadia just stuck with something to drink and a few bites of my food. This would prove to be a wrong move later for me; as soon as we hit the road again, I was feeling similar to her. After a few more hours we were finally in Pokhara with a couple of hours to go exploring around the lake before sunset. 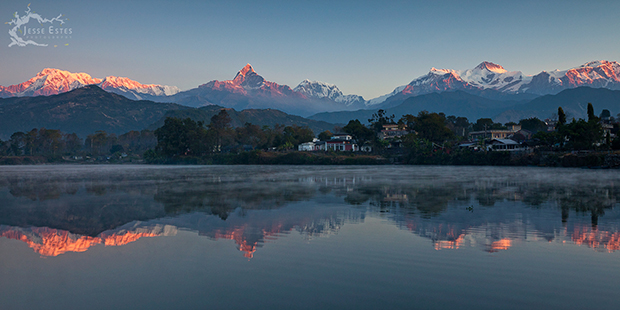 First impressions of Pokhara were just as we were told; basically much cleaner and less cluttered than Kathmandu. It was a great place to just chill out and relax for the end of the trip. We didn’t do a whole lot of trekking deeper into the mountains, as we didn’t have a lot of time, but we did do a lot of relaxing and photographing around the lake and some of the higher viewpoints. There were a few places that we wanted to go to, including one place called “The Austrian Camp”, but we just never got around to it.

I have so many good memories from this place, and I can’t wait to re-visit it again and do some deeper trekking into the mountains also.