After a short stay in Kathmandu, I was off to the airport to take the crazy flight to Lukla, high up in the Solu Khumbu Nepal. It was an early morning flight and my driver “Bob” was running behind; it had something to do with all the beers and chili chips we consumed the night before. You can read more about my adventures in Kathmandu here… 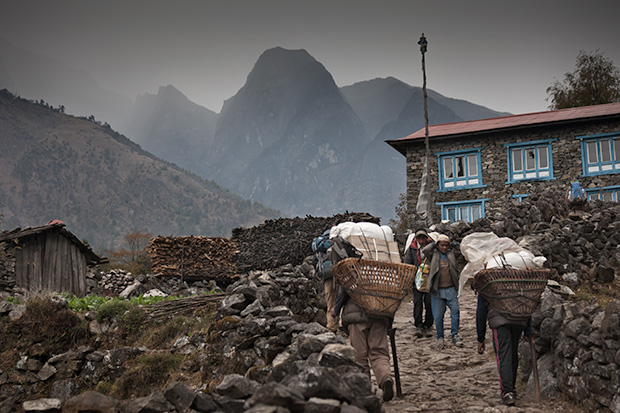 Getting to the Solu-Khumbu Nepal

A month or so before my trip I was doing some channel surfing and came across a show on the history channel that was counting down the top 10 most extreme airports in the world. They were on number 4, so I decided I would stay tuned for a bit, and sure enough, the number 1 most dangerous airport in the world was Lukla. I continued to watch and become more and more freaked out about my flight into this tiny airstrip.

The surrounding terrain, thin air, highly changeable weather and the airport’s short, sloping runway make it one of the most challenging landings in the world. The History Channel program Most Extreme Airports ranked it as the “most extreme” airport in the world. The airport is popular since Lukla is the place where most people start their climb of Mount Everest. There are daily flights between Lukla and Kathmandu during daylight hours with good weather. Although the flying distance is short, it can easily be raining in Lukla while the sun is shining brightly in Kathmandu. High Winds, cloud cover and changing visibility often mean flights can be delayed or the airport closed completely.

You can read more about the airport here on wikipedia if you are interested. After landing, I found out that just two weeks earlier the airport had been closed completely for 1 week due to bad weather. There were  apparently close to 2,000 tourists stranded and only a few helicopter flights in and out during that time. You can read about the flight delays and the stranded tourists here.

My flight into Lukla was delayed a couple of hours, and a little nerve wracking to say the least. Lukla was fogged in and we had to take a short detour and land on this little dirt strip on the side of a mountain. Everywhere is surrounded by peaks, and only the most experienced pilots fly the route, but it still freaked me out. After waiting about 20 minutes, we took off again and landed in Lukla about 10 minutes later. Upon landing in Lukla, everyone was clapping and cheering, and I imagine this is the norm; just happy to be alive 🙂 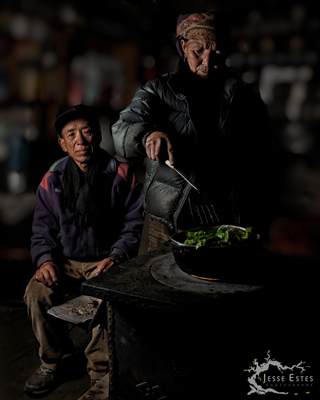 From there, I linked up with Mingma’s father and started my trek into the Khumbu. There are no motorized vehicles allowed beyond the airport, and right away you start seeing porters and Yaks hauling extremely large loads of goods up into the mountains. Most trekkers take their time and spend 2 days for the trek between Lukla, and the Sherpa capital of Namche Bazar. I misunderstood my friend Mingma when I was talking with him on the phone, and I thought he said that if I felt good, just trek all the way to Namche without stopping for the night.

I was doing good, and we decided to go all the way to Namche. The problem was the last 2 hours of the trek was a serious push, and very steep. We made it there just as it was getting dark, and I don’t think I have ever been that exhausted. I was not in the best shape to begin with, but after doing some serious trekking in Indonesia, I was doing much better than if I had just gone straight to Nepal first. I was very tired, but because of the elevation, I did not sleep well.

The next morning, we left Namche for the short 2 hour trek to the Sherpa village of Thame where I would stay with Mingmas parents, in the same house he grew up in. My original plan was to just trek the next 2.5 weeks up in the Khumbu, but I had changed my plans so that I could also see Pohkara in Western Nepal. This is the main reason I was trying to move quickly. In hindsight, I should have just done one or the other, but I was glad that I was able to see so much of Nepal. On my next trip to Nepal, I plan to spend much more time in both areas. 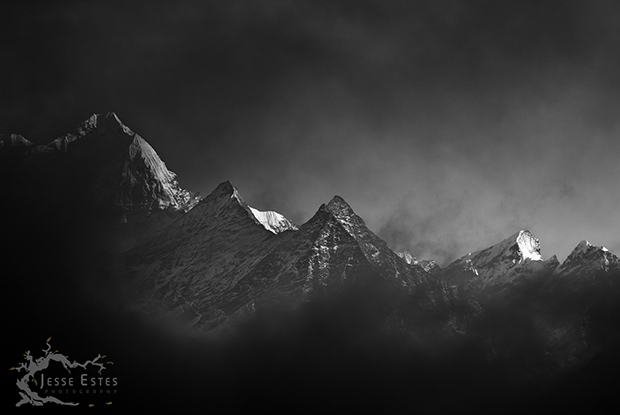 Thame only has about 30-40 houses, but the village has several famous Sherpas that live there. Directly across the path from Mingma’s house lived the most famous Sherpa of them all; Mr. Ang Rita Sherpa. I saw him working around his house one night just as we were about to eat dinner, and then I never saw him again… Mingma’s father was friends with him, and suggested that we go over and drink some whisky with him and try to photograph him, but I didn’t see him after that and didn’t feel like disturbing him.

Mr. Ang Rita Sherpa: (HERO OF THE HIMALAYAS) Ang Rita was born in 1949 in Thame Solu-Khumbu Nepal. He is known as being the only person to top Mt. Everest 10 times from 1990 till 1998 without oxygen. Because of his feats Nepal has awarded him the honours of Gorkha Dakshin Babu First and Trishakti Patta First. You can read more about him here. 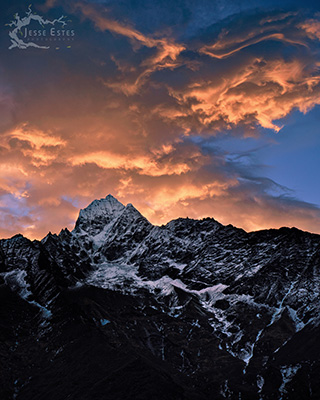 I spent one night here before continuing up to the Tengboche Monastery. Tengboche is at 12,700 feet, and after hiking all day and getting up there, I began to feel very sick. I was exhausted, but I was also having what I think was a bit of a food related problem. Something I ate was not mixing well with me, and it had been bothering me for a couple of days. Combined with the elevation, I was really not feeling well at all. I was very cold one hour, and then sweating the next, and I had a terrible headache. 12,700 feet is not terribly high up, but because I didn’t take a few days at the lower elevations to acclimate, I was really feeling the results up at Tengboche. I photographed the sunset, and had stunning views of Mount Everest, and the surrounding peaks, but not any really amazing light.

The next morning I woke up feeling just about the same, with a splitting headache that just would not go away. Just after waking up, a helicopter landed to evacuate an older man of about 60, due to altitude sickness. While I had hoped to go up higher and visit some more areas up there, it wasn’t a good idea to push my luck, and we decided to descend. After dropping down roughly 1,000 feet, I started to feel much better and my headache eased quite a bit. I spent the next few days at Mingmas house in Thame, and then started my trek back to Lukla and Kathmandu. 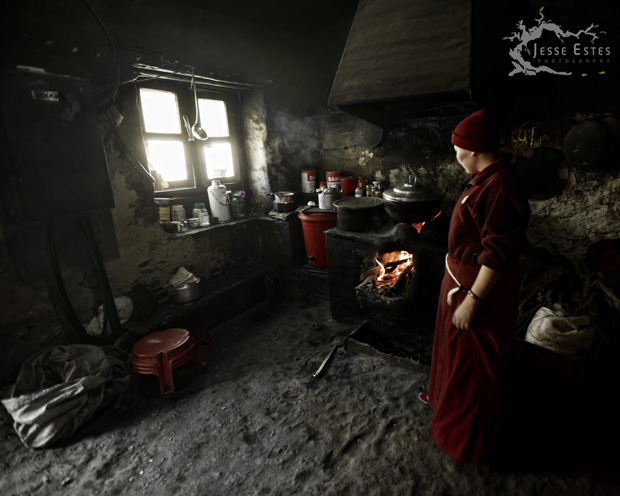 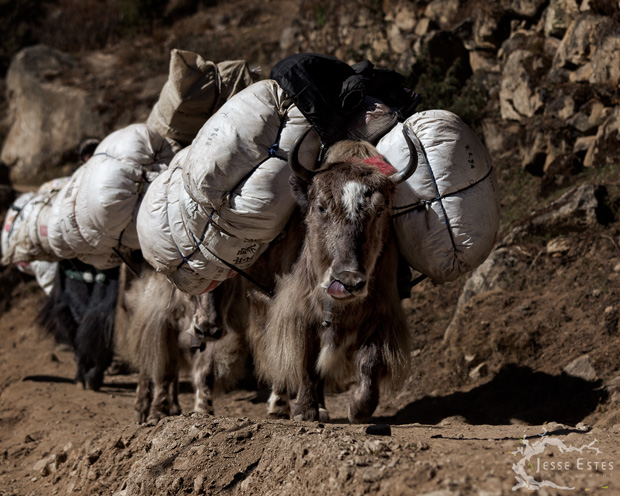 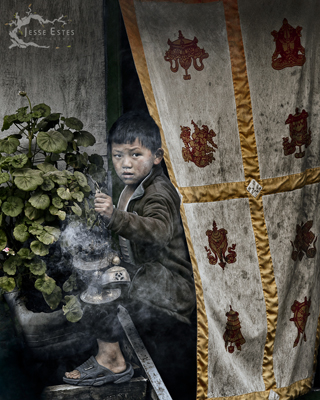 When I got to Lukla, I had the chance to stay in a friends lodge for the night and enjoy the local area for awhile before leaving back to Kathmandu. The next morning I was scheduled for the first flight at 7am, but there were some delays… It was nice and clear in Lukla, but Kathmandu had thick fog, and we didn’t end up getting out of there until almost 11am. The airport had no heat, and I remember being quite cold just sitting there for a few hours without moving around much. Once back in Kahtmandu, it was back to chili chips, and beer for a couple of days before heading to Pohkara in western Nepal for the next 8 days.

I really wanted the chance to see the western part of Nepal, and I had heard great things about it being a nice relaxing area that was much cleaner than the city of Kathmandu. After hanging out in the Thamel area of Kathmandu for two days, I was off on a crazy bus ride to Pohkara. I will cover Pohkara in a future post 🙂 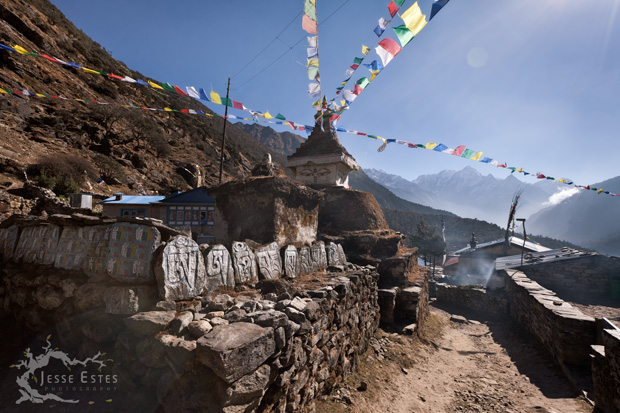