After spending a couple of weeks in China, and a few days in Malaysia, I was glad to be back photographing Bali Indonesia. I don’t know exactly why, but there is just something about Bali that makes it one of my favorite places on earth. 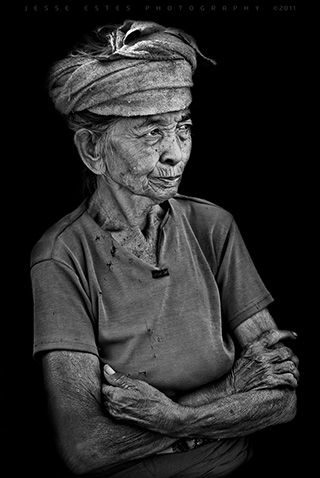 I love the smell, the people, the food, the landscape, and just the culture in general. There are a lot of people in Bali, but everyone seems to get along just fine.

It was kite season this time of year, and Bali knows how to celebrate kite season in grand style; some of the kites were as big as a car. I watched about 8 kids launching one of these huge things at the beach one night, and it was quite the team effort, but they got it up in the air eventually. As you drive around the island, you see these huge kites everywhere in August.

The markets in Bali are a great place to capture everyday life and great portraits. There’s no other place that I have photographed people with such little resistance. The people are just very outgoing and never seem to mind the camera no matter how many times you photograph them. Helminadia took me around some of the markets in Ubud and I was overwhelmed to say the least. I think I filled up a 16GB card in just under an hour of moving around. I could spend all day in these markets without getting bored for sure.

My favorite food in Bali has got to be the fish Satay; they basically take minced up fish and spice it up with all kinds of spices and put it on the end of thick bamboo skewers. Then they roast them over a fire of coconut husks rather than charcoal. I also had my fair share of the roasted sweet corn as well. You can find both of these things at one of the many small shops that are scattered around the island. They are literally everywhere you go. The food is also very inexpensive. 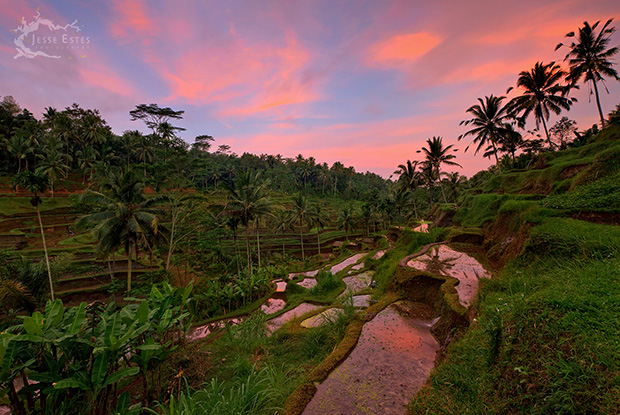 I spent most of my time in and around the town of Ubud. It’s quite the artist hub, and full of local paintings, wood carvings, and just about anything else that you can think of. They have the famous Tegallalang rice terrace there that attracts quite a few tourists, and several Hindu temples and festivals within a small area. I enjoy hanging out in one of the several little restaurants that line the edge of the rice terrace. It’s a great place relax and drink a Bintang or 2 while waiting for the sunset. If the sunset looks good, you can make a short scramble down into the terrace and setup for some photos. If the light never gets good, then you just relax and order another beer… 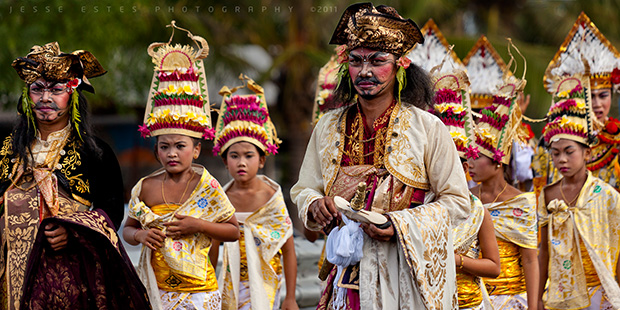 While heading to the beach one night, we came accross a huge caravan of people dressed in traditional Hindu clothing marching towards a temple for a festival that happens once every 10 years. We would photograph them for awhile, then drive up the road a little further and wait for them to come again. There were several road blocks setup on the busier road, and it was fun racing ahead an then waiting for them to show up again. 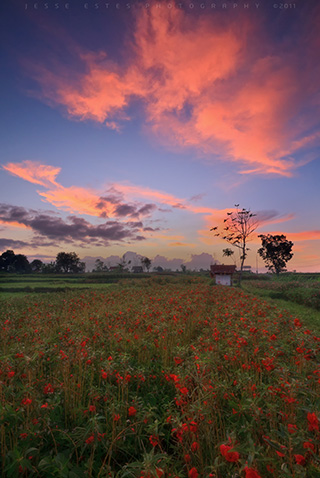 I spent most of my time just outside of Ubud, and the surrounding area is full of smaller rice fields, and several small flower fields. They grow the flowers for use in the many different Hindu traditions. The fields can be very photogenic in the right conditions, and while I tried a few times to capture it, I never really got the greatest conditions. The house where I stayed, was surrounded with flower and rice fields, and there were a few that were just a short walking distance away.

The problem with these fields? SNAKES! I’m not afraid of very many things, but snakes are one of the few things that I would rather not encounter, ever… Of course, Bali has some of the most poisonous snakes in the world including SE Asia’s most deadly, the Malayan Krait. I had heard about the snakes in Bali, and before going there I did some basic research on the internet to see how serious the problem was; it turns out that there had been 2  recent deaths from this Malayan Krait in Ubud alone. Even though this species is not all that common, every time I stepped foot into a rice or flower field, I was sure I was going to run into one. My basic strategy was to always let someone else go first, but it wouldn’t always work. Helminadia never wanted to go first 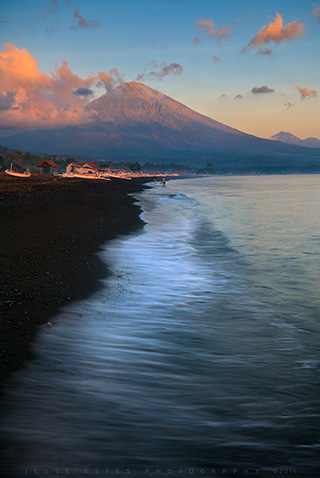 I guess the individuals were playing with and provoking the snakes in both cases, but it was still enough to freak me out. The more common snakes are the green tree vipers, and 2 variations of King Cobra. The problem is that most of the anti-venom is not available in Bali, and if you get bitten, you either have to get somewhere that has it, or hope that they can get it very quickly. Anyways, enough about the snakes, I didn’t see any the whole time I was there. Apparently, Helminadia and others saw a huge one on the road one night on the drive back from the beach, but I was fast asleep and didn’t even notice.

A very close second, and possible tie for favorite places in Bali, is Amed. Amed Bali is not just one village but a string of smaller villages located on a 10km road in the Karangasem province. Amed Bali is mostly a quiet place with a stunning ocean view. Since this area is one of the best places to go to for scuba diving in Bali, travelers mainly come here to marvel at the diverse sea life.

Besides diving and snorkeling the main activity is just relaxing far away from the crowds in the south… This place was amazing, and it also had a Reggae Bar with local bands playing on the weekend. Amed is also famous for Salt and black sand beaches. Every morning we would witness the salt miners walking back and forth from the ocean with big containers of salt water slung over their shoulders. They would then process the water and somehow come up with the salt. 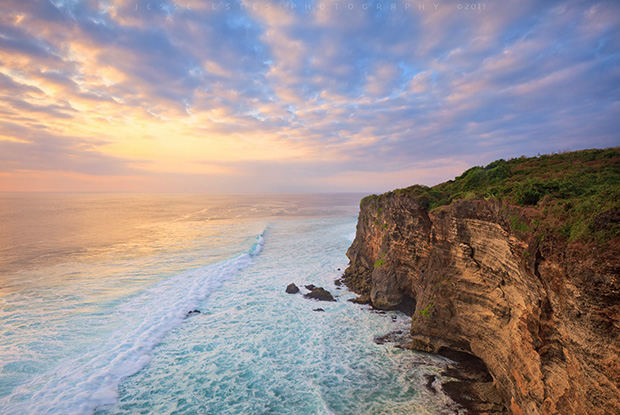 One place that I wanted to visit, but wasn’t able to on my last trip was Uluwatu. Uluwatu is probably the most famous surfing spot in Bali, but the cliffs are also very photogenic. I had heard horror stories about the very aggressive monkeys, but I still wanted to see the place for my self. I decided to brave the monkeys and head over there with Helminadia and Niar. 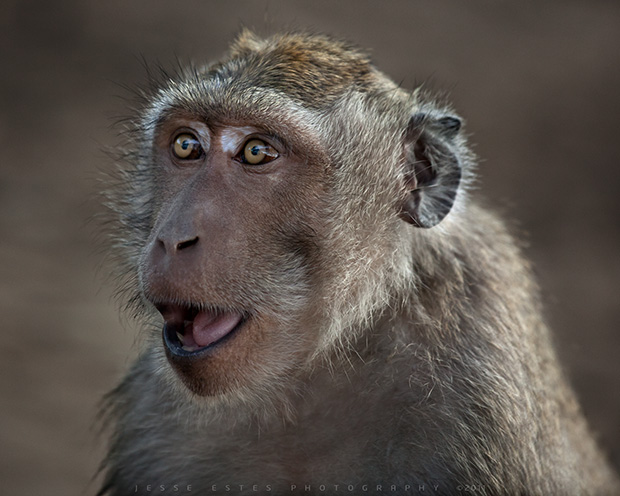 As soon as we pulled up I realized that this place was a major tourist attraction. It was the weekend, and the place was full of people. You can’t miss the signs that describe the monkey problem. The thing is, these monkeys have become very smart, and know how to deal with the tourists. They will steal anything that they can get their hands on, and the only way to get it back is if there happens to be a guide around with some food; they will trade whatever they steal for some food. I witnessed one guy stand up on a bench and in the process his flipflop came loose a bit. With a blink of an eye, the monkey had his flipflop. He foolishly tried to grab it from the monkey and almost got bitten. 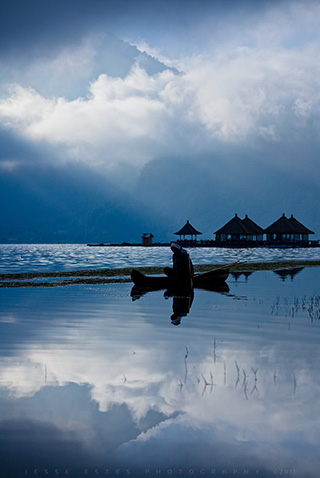 After that, I rolled with my tripod legs extended and ready for battle. I found that they really didn’t like the tripod and would walk way around me. Soon after that, I noticed Helminadia and Niar copying me, LOL. I have to say, it was a bit nerve wracking to photograph on the edge of these cliffs with crazy aggressive monkeys all over the place. I have heard that as it gets closer to sunset time, the monkeys don’t like people next to the cliffs for whatever reason, and they will start trying to scare people off. We were basically standing right on the edge of the cliff in order to get a composition without any intruding foreground elements.

After sunset, as we were walking along the cliffs, we heard quite the commotion up ahead on the trail. Sure enough there was a monkey on the cliff with someones small point and shoot camera. He was holding it hostage for some food, but the people didn’t have any food. They were trying to scare the monkey into giving it back, but I don’t think it was working. We hurried by with our tripods extended, and basically just got out of there. I don’t have a lot of experience with crazy monkeys, and was happy to just get back to the car without any encounters.

Another very photogenic spot in Bali, is Lake Batur. Lake Batur is the widest lake on the island and it lies down at the feet of Mount Batur and Mount Abang. It’s a very photogenic area, but I also found it to be very very dirty. I noticed several trash piles next to the lake or very close to the lake, and it seemed like a problem in general. It’s sad to see such a beautiful area littered with so much trash. This area is great for sunrise, either up above the lake, or down on the shoreline.

Last time I was here with Helminadia, we were lucky to get some really nice rays coming down on one of the local fisherman, and we were hoping to catch it again. After nearly giving up and heading home, we were not disappointed at the last minute by some rays of light breaking through the clouds.

I had an awesome time in Bali, and have to give special thanks to Helminadia, Niar, Rolland, Stan, Ernus, Edwin, and Made’ for making it all possible!